At this time, we realized that A.A. had grown up, that our Fellowship was ready and able to take these responsibilities from us. There was also another urgent reason for change. Since we oldtimers couldn’t live on forever, newer trustees would be virtually unknown to the A.A. groups, now spread over the whole earth. Without direct linkage to A.A., future trustees couldn’t possibly function alone.

This meant that we had to form a conference representing our membership which could meet yearly with our board of trustees in New York, and thus assume direct responsibility for the guardianship of A.A. tradition and the direction of our principal service affairs. Otherwise, a virtually unknown board of trustees and our too little understood service headquarters operations would someday be bound to collapse.

The deliberative body known as the Conference is made up of elected area delegates from the United States and Canada together with the trustees, the directors of A.A.W.S. Inc., and The A.A. Grapevine, Inc., and G.S.O. and Grapevine staff members…. Each state and province might be allowed one delegate. Those containing heavy A.A. populations could have additional delegates.

The state of Ohio is made up of 4 areas (shown below): 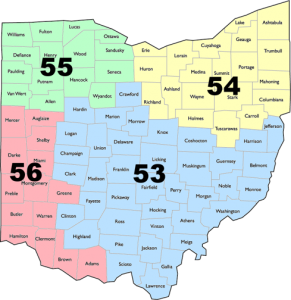 Area 55 is part of the East Central Region (shown below). 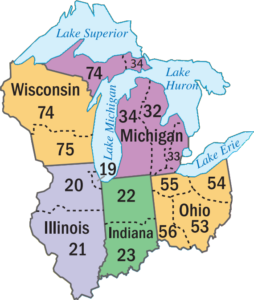 The United States and Canada contains 93 Areas. Click here for a map.

No General Service Assembly in March due to Area 55 mini conference March 4-5, 2022